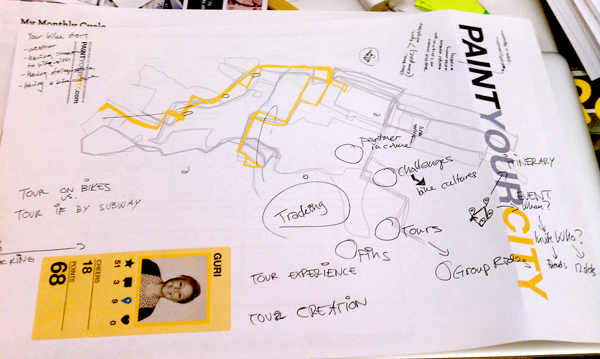 Throughout the months, our thesis project has expanded and contracted with ideas; mainly expanded. Though, our challenge all along has been to get more people biking. A break and space away from it has, thankfully, brought us clarity.

As explained in our initial project description written in September (2011), the concept was once very focused on a physical bike helmet embedded speakers, buttons, sensors and a microphone:

Our project addresses the needs of urban pedalers. New Yorkers bike in chaotic environments. We want to make riders’ trips more seamless while giving them tools to delightfully experience and discover New York from their bike seat and with friends. We’re making a digital toolset embodied in a physical bike helmet. It will provide spoken directions, track riding habits and help riders document trips and arrange rides with friends. Unlike a high-tech GPS bike computer, it will have a charming personality and be designed for the casual and committed commuters.

An endeavor that is part of the SVA IxD thesis program, we hope to create your bike’s better half.

The project continued to involve the helmet throughout the entire semester. But, in October (2011), we decided to design a game, called King of Two Wheels, to explore our concepts around motivation, wayfinding, tracking, and discovery within a city. Hosting this game throughout a week in our studio got us more interested in the shared work environment as the focus for intervention. We iterated further on this idea through developing office game kits, and digital communal maps to be projected on the office wall.

At the end of last semester, the project was filled with opportunities and features—from receiving spoken directions and bookmarking places during a ride to competing for miles and new places with fellow workers. Then, we each took a very deep breath and a three week break to our respective homes, Oslo and Missouri/Texas.

We returned to New York and realized that, rather than adding capabilities to the bike ride itself, the project should focus on how to motivate people while they are not on their bike seat. We believe and have seen the power of data tracking on a communal map, and will leverage this idea as the core of the project. It’s called Paint Your City.