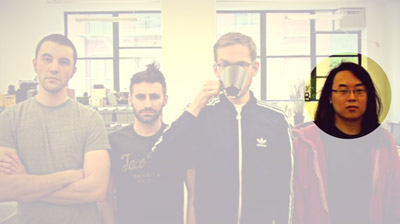 With Teams:
It’s a sunny day perfect for riding. The sun beats down on the cooble stone streets of Dumbo. Will Wang ever ride? Mattias rides his bike everyday. Naturally, it makes Wang a little curious. Mattias finds SPOKED and decides to start a game. He invites, rather “summons” Wang into it so that he’ll have an excuse to get on his bike and ride. He can’t say no to helping Mattias beat his friends on the COGS team.

Measuring happiness only (no competition):
Mattias wants to get his friends with dusty bikes to ride. So, he tells them they will be happier if they just ride. He invites them to join him in measuring their happiness for two weeks.

Avid biker dilemna (with teams & friends):
Mattias signs up for a game against the COGS. He has 8 spots to fill in order to play. He thinks through all of his friends. He knows 9 avid bikers and a handful of people with bikes in their garages. Of course if he chooses the avid bikers they will win. But will they? If he chooses the weaker links, could they still win?

He wasn’t riding much in the beginning. But, on the third day, he decided to give it a try. There’s no way he was going to win, but he could at least help the team get ahead in the game. On his second day of riding, he gets the word that his miles for tomorrow will be doubled. Of course he’s going to ride get the most from his efforts. Super-spoked days are game changers.

Wang hears buzz about a bike battle happening in his work. He doesn’t have a bike, but wants to be a part of it. So he chooses a color and joins. He doesn’t ride ever. But other people are riding. And they’re talking about it. He wants to, but is too busy. On the weekend, his co-workers organize a group ride. He decides to rent a bike and join. Afterwards, he doesn’t ride anymore.

NOTES FROM BREAKFAST & THEREAFTER
Collaboration:
- Get avid riders to choose people that aren’t biking already
- normalize points, incentivize summoning non-riders
- Team size
- Who are you collaborating against
- Friends or strangers?
- Friends or co-workers?
- Number of teams competing
- Are the team sizes flexible?
- Team within a team
- boys vs. girls
- avid vs. non-avid
- ordered by commute distance
To be a part of something, means you’re contributing

Setting:
- friends and strangers?
- workplaces, co-workers?
The behavior that we want is for the avid rider to big brother the non-biker.
“Let’s do this together!”